Customers rate us 4.9/5 based on 4375 reviews.
No reviews
Regular price $49.95
/
GST included. Shipping calculated at checkout.

With over 230 craft breweries in NZ and at least 2,000 beers at any given time, craft beer can be pretty full on. But have no fear, Beer Hug is here. Whether you are new to craft or a complete craft nerd, this is an incredible tasting flight. One that will take your taste buds to new taste heights!

In this selection, we’ve pulled together 12 of NZ best craft beers from 6 of NZ’s most awarded breweries in all the most popular styles. We’ve put all this in a box that we’ll ship to you for a bangin’ price too. This box ticks a lot of boxes!

For those of you who are new to craft, we thought we'd tackle some commonly asked questions. If you are a craft aficionado, scroll down to the incredible selection of award-winning beers below!

So, what’s a Pale Ale then?

A Pale Ale is a typically golden to amber coloured style of ale which is brewed using an ale yeast and predominantly pale malt.

And what’s the difference between a Pale Ale and an India Pale Ale (IPA)?

When it comes down to it, a Pale Ale should have a nice hop character but medium build, whereas IPAs tend to be bigger, hoppier beers and have higher ABV (Alcohol By Volume) and IBU (International Bitterness Units).

Then what’s a Brut IPA then?

A Brut IPA is a bone dry, fizzy, champagne-like and light bodied beer with plenty of hop aromatics. This new style of IPA is named after the word ‘Brut’ used in the champagne world to describe how dry the wine is.

OK, so what’s the difference between an IPA and an APA (American Pale Ale)?

The short answer is that IPAs are hop-and-alcohol-heavy pale ales, originally created to last lengthy shipping times, while APAs have a balance of malts and hops, with a lighter character and citrusy punch to them.

Righto, tell me about Hazies….

A Hazy, like the name implies, has a cloudy appearance, one you can’t see through like other beer styles. The blend of malt and hops, along with less filtering before packaging, yields a beer with lower bitterness than other IPAs and hop character that’s decidedly fruity—you’ll often hear ‘juicy’ as a flavour descriptor, like a tasty bite of ripe citrus.

Is a Pilsner just another lager?

Enough theory? Let’s jump into the beers contained in this awesome one-off box. You’ll get the following 12 x 330mls for only $49.95*

We hope you enjoy this journey of discover with us. Get amongst it and grab a box today, while stocks last!

Absolutely stoked with the selection and cant wait for the next one.

Some great tasting bevvies! For me Cryo Ren was a standout. Had to purchase another SW related brew from Behemoth to pair with it. Unfortunately no golden can for me but tasty beers made up for that!

Another set of bangin beers from behemoth. Juicy. Thick and tasty. Easy to drink. And at a great price range. Chur team 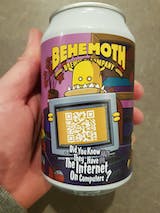 Due to having covid I have only just started drinking again, so I have only had 1beer but it was bloody delicious

M
CANYON FRESH AS DEAL! Marcus Arnesen
Bring it back!!

What an amazingly selection from a crisp Pilsner through to some solid Japanese hoped hazy PA that we’re next level. Canyon and the lads at Beer hug delivered on this one. Bring this box back!!

A great way to buy the beer I like.JB

We loved this, especially the collabs. Zenkurd Dry rice lager got top marks, closely followed by all the hazys and (surprisingly for us non-sour lovers, A Perfect Pair botanical cherry sour). What a revelation!

Beer was delicious, service was speedy and updates were provided throughout the shipping process. Excellent experience all round.